The free, printable game boards and answer keys require players to have the ability to solve simple multiplication problems. The game is best suited for kids who have learned their multiplication tables but would benefit from practice. Depending on the state standards and type of schooling, 3rd-5th graders should be able to play. 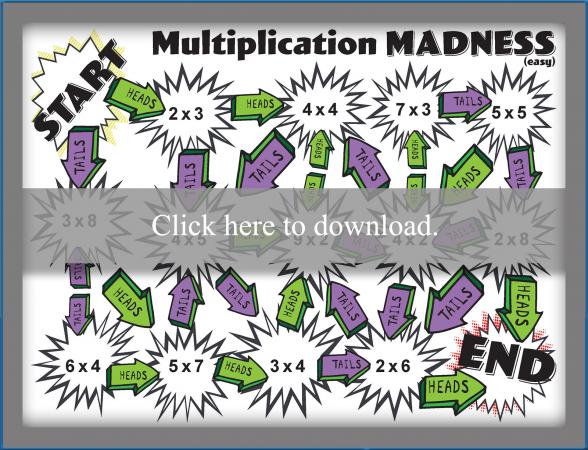 Any number of kids can play Multiplication Madness, however, due to space constraints, it is ideal for two to four players to use a single board. A bit of luck and some math skills are all a kid needs to be the first player to reach the 'End' space.

To play the game you will need:

To avoid any confusion during game play, be sure each player has a different game piece. Also, make sure the coin used for flipping cannot be confused with any game pieces.

Once all players have chosen a game piece, they can be placed on the 'START' space. Choose a player to go first. Game play then moves clockwise.

The 'Easy' game features multiplication facts up to five while the 'Hard' game tackles facts from 6-12. Multiplication Madness can be played in a classroom setting where kids at different skill levels can be separated using different boards. The game can also be played at home or on an individual basis.

How to Create a Multiplication Game

Making a multiplication game can be easy, fun, and ensure you are focusing on the facts your students need to master.

Playing games helps kids have fun while learning. Practicing multiplication facts using Multiplication Madness can take the pressure and stress out of a sometimes difficult task.