Supplement lesson plans or holiday activities the second Monday in October with Columbus Day trivia. Whether you celebrate the controversial holiday or not, quiz questions give you a better understanding of what Columbus was all about and why many celebrate him.

Find out the truth about Columbus Day with thirteen multiple choice and thirteen true or false questions related to Christopher Columbus and the holiday. To download and print the free questions with answers, click on the image of the printable. The Adobe Printable Guide can help with any troubleshooting issues you run into. 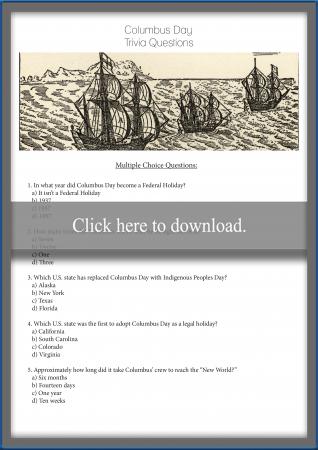 October 12, 1492 marks the day one of Christopher Columbus' sailors spotted the land they then thought was part of China. Eventually, it was discovered this land wasn't Asia, but rather part of a 'New World.' Columbus became governor of this territory and often utilized slavery and harsh punishments as part of his rule. Eventually he was stripped of his title by the Spanish King and Queen.

Three hundred years after his accidental discovery, the Society of St. Tammany celebrated the first Columbus Day to commemorate the occasion. Columbus Day became a national holiday in 1934 thanks to President Franklin D. Roosevelt. It was originally celebrated on October 12 each year, but later changed to the second Monday in October. Today some states and indigenous groups in the Americas have protested the holiday, stating that Columbus didn't actually discover America and was cruel to the native populations he encountered. Indigenous Peoples Day is sometimes celebrated in place of Columbus Day.

Trivia questions make great history quizzes for people of all ages, but they can also be used in more creative ways.

Become an explorer yourself as you sail into the educational and fun world of Columbus Day trivia. Kids and adults can use the questions at home, work, or school for entertainment or learning.